The history of organized European colonization on the islands began when settlers from the Danish East India Company arrived in the Nicobar Islands on 12 December 1755. … In 1789 the British set up a naval base and penal colony on Chatham Island next to Great Andaman, where now lies the town of Port Blair.

For some period the Japanese army also took control over theses islands; yet, the British resumed control over the island in the 19th century. During the 19th century, the British used Andaman and Nicobar as a penal colony, which was named ‘Kalapani’ with the infamous Cellular Jail. The history of Andaman and Nicobar Islands shows a lot of Indian freedom fighters tortured and killed by the East India Company.

With the Indian Independence, these beautiful and pristine islands of Andaman and Nicobar became a part of India, which today is a union territory of India.

It comprises of 572 islands out of which 32 island are inhabitated and is spread across 800 sq kms between Myanmar and Indonesia.

The total population of ANI is about 5.00 lakhs with about 40% of working population and has a cosmopolitan culture with Hindi and English as the common languages with excellent law & order situation. Andaman & Nicobar Islands are also home to a tribal population of Nicobarese, Jarawas, Sentinalese, Shompens, Great Andamanese & Onges. 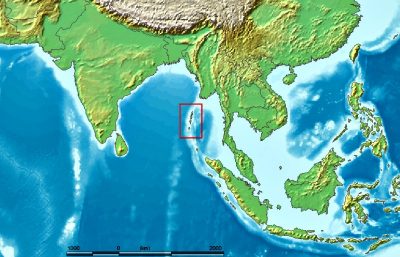 All the islands are interconnected by regular ferry and ship services. There are also helicopter services operated by Pawan Hans with limited seats. Private and charter boat services are also available for interisland travel.

Indian tourists are free to visit the Andaman Group of islands but may need special permits for visiting certain islands in the Nicobar group.

Foreign travellers visiting Andaman Islands should have a valid visa and should get their restricted areas permits which are provided right upon arrival in Port Blair airport. Foreigners are restricted from visiting the Nicobar group of islands.